In Kazuyoshi Usui’s Showa series, I’m struck by the hyper-realism of a secret world. Set in the near future, Usui gives us an insight into an underworld which might typically be seen as noir, lurking in shadows or in diffuse print grain, but instead, is clearly illuminated in daylight saturated glory. Released last year by Zen Foto Gallery, Showa ’92 continues four years on from Showa ’88; both are superb works of semi-fictional theatre projecting the previous era’s imaginary spirit into the future.

Out of its drab card slipcase, Showa ’92 reveals its treasure. Leafing through its pages, it feels a bit like looking at disassembled parts of a film that was never made, things don’t quite come to form a coherent narrative with a start-middle-end. There is a feeling that the various actors and scenes in kitschy pink decor are loosely related yet still maintain their independence in single images through the space and seperation Usui creates for them. The absence of any text or captioning gives us no option but to imagine either a formal meditation on colour or a selective study in an obscure Japanese subculture we probably know nothing about. The following email exchange with Usui and Zen Foto revealed much more.

Sunil Shah: The title ‘Showa’ refers to an era in Japanese history. As a period what does it represent? Can you tell me how the contemporary state of Japanese life contrasts with that of the Showa period?

Kazuyoshi Usui: Showa 88 and Showa 92 is a documentation of Japan along with an imaginary time axis as if the Showa era were still continuing in a different time and space. It is a name of the Japanese regnal calendar. It refers to the emperor system. Showa finished at the 64th year in 1989. This work depicts a parallel world in which Showa era has not yet finished. This does not, however, reflect nostalgia towards the past, but a documentation of the present time in my own way.

For me, ‘Showa’ represents ‘living through.’

Showa was an era of disorder. Losing everything through World War II, Japan was desperate to survive. The country made enormous efforts to develop, with rapid economic growth, and after the bubble economy burst, the bustle disappeared, and a super-flat era arrived. Despite the recession, materially the country is still rich, and we can feed ourselves without problems. We should appreciate it. However, I am concerned that the strength, or the power to survive, has been increasingly lacking. While living in a materially rich society, our mentality is poor. For human beings to live through, society has created two sides that are intertwined with each other; ‘white and black’ and ‘lightness and darkness’. Areas where outsiders and people in the lowest social class resided used to radiate a desire for survival. (Talking about these areas is still taboo.)

A clean-up operation is underway throughout the city, as a run-up to the Tokyo Olympics in 2020. Things that give a sense of danger are eliminated and instead an emphasis placed on the super-clean and super-safe city. Today’s Japan is immensely sterilized. When our immune system overreacts, it causes allergic disorders. Today’s Tokyo and Japan are in such a condition. I am also concerned that Tokyo is becoming dehumanized, with a high degree of safety and convenience. The places of asylum for society`s outsiders are increasingly lacking. There was some room for coexistence in Showa, which comes from some mental capacity to bear incompatibility.

The ‘Shōwa Era’ was a period with of great tolerance towards outsiders. To live through/survive is not necessarily an admirable or desirable thing. If we try to do so at any cost, we will inevitably cause “contradictions”. From my point of view, “contradiction” is the essence of ‘humanity’. Nowadays, Japan is in the process of cleaning up the “contradictions” here, there and everywhere. The balance of coexistence is something that can only be managed by human beings.

In my works, I presume a “Showa Era” as if it had never ended, in which people are trying to live through and co-exist with each other. In other words, I set up an alternative ‘multiverse/parallel world’, aiming to document contemporary Japan from my own perspective. In the near future, when those “contradictions” are disappearing and are engulfed up by time, I am outputting a ‘reality/truth’ and ‘virtuality/imaginary’ which comes together in the medium of photography. 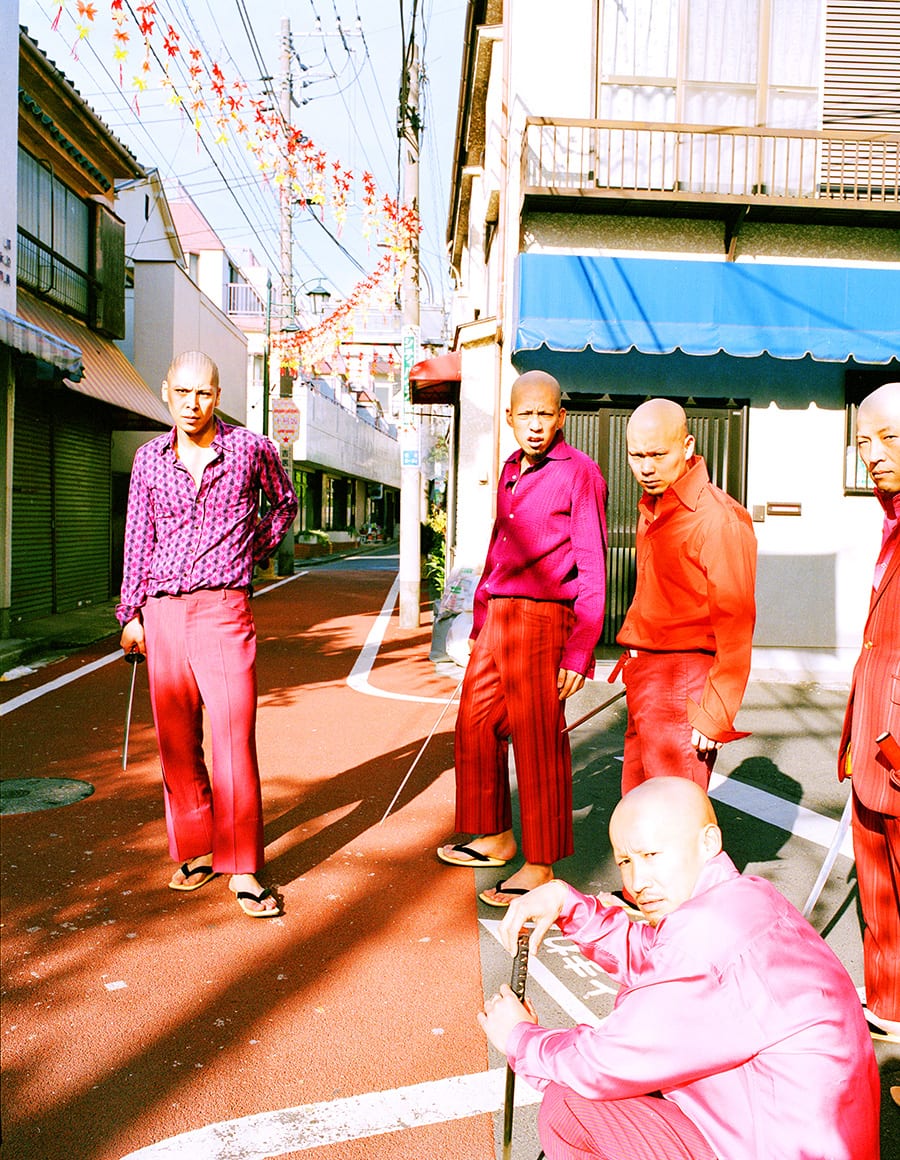 SS: The very distinct use of colour, on the one hand presents us with a strong contrast to the ‘everyday’ reality that normally surrounds us, the colour is bright and alluring, kitschy and at times quite garish, on the other hand the use of colour allows us into an almost fictional world, perhaps a technicolor dream. I am reminded of the Wizard of Oz for instance, the colour might symbolise happiness and hope thats sits behind something more sinister. Is this effect something you consciously worked on? This particular use of aesthetic?

KU: For me, the essence of photography is conflicting beauty. I love unifying things of conflicting natures. Sublime and obsceneness, horrifying and comical, real and fake, western and eastern, and life and death. Having two conflicting sides is human nature. I love presenting underground subjects through overground methods. A photography of a beautiful flower would bear a variety of historical backgrounds with some scrutiny. I care about this contrast and the tone of this body of work came out of such a nature.

SS: I understand the some of the locations were in red-light districts. Can you tell me a little about the choice of locations you worked in? What did you find there that was of interest to you?

KU: Nishinari in Osaka, Gojo-rakuen in Kyoto and Sakae-machi in Chiba are left-behind places from the modern-contemporary Japanese society. These poor cities are nevertheless radiating vivid colours, as if bolstering up daily lives with significant visual appeal. I see their desperation to live, to the point of feeling pains. I find it enormously beautiful. On the other hand, in the highly modernized areas such as Tokyo I see only grey, inorganic landscapes. These areas have never excited me.

SS: What was the reason for continuation from Showa 88 to Showa 92? Why four years later did this project get reborn? Are there any differences or connections between the two works?

KU: In my view the Showa cultures remain by a narrow margin will be completely disappearing along with Tokyo Olympics in 2020, and a new Japan will be born. I am thinking of presenting a new work by that time.

SS: Can you tell me about the input of the designer, Satoshi Machiguchi with the two books? In the absence of text and narrative, how difficult/easy was it to form a coherent sequence between the images? Can you tell me anything about the process of translating the work into book form?

KU: I told Machiguchi-san that ‘gentlemanly madness’ should be the theme for the book (and editorial) design. As I did not want the book to be of documentary photography, I completely omitted texts from the book. Showa 88 and Showa 92 employed the same format and size. They are designed to invite the readers to view another story upon opening the two books together and turning over the pages. I hope you will try and see it.