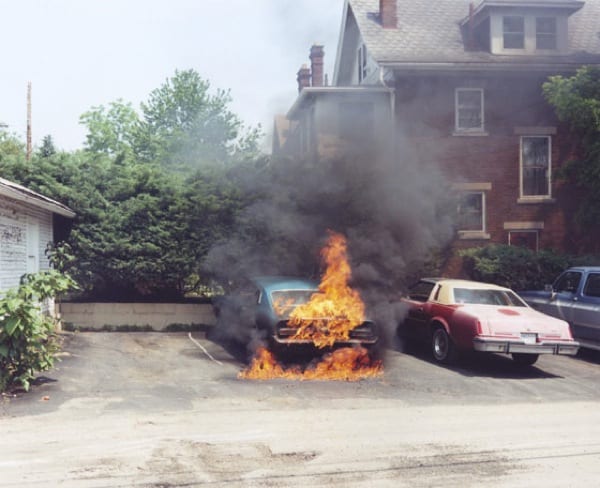 Joachim Brohm’s work demonstrates that there are other kinds of “straight” photography in Germany besides the “Becher School.” The effect of Brohm’s work is comparable to that of the Bechers: he equates reproduction and the autonomous image, realism and abstraction, but his vision is different. While Thomas Ruff, Thomas Struth, or Axel Hutte place classical subjects such as humankind, a landscape, or the city at the center of their work, Brohm’s images seem strangely empty. Their centers seem to have fled; a surface has appeared in front of the camera’s lense that surrounds the actual image. In one image, a high wall obscures a house; one can only see the chimney and the peak of the roof. In another, one can only surmise what can be seen through the holes of a sheet of corrugated iron. Decentralization, the empty center becomes characteristic of Brohm’s work; the dynamic components of the image are pressed to the periphery just as in the paintings of Sam Francis or Clyfford Still. 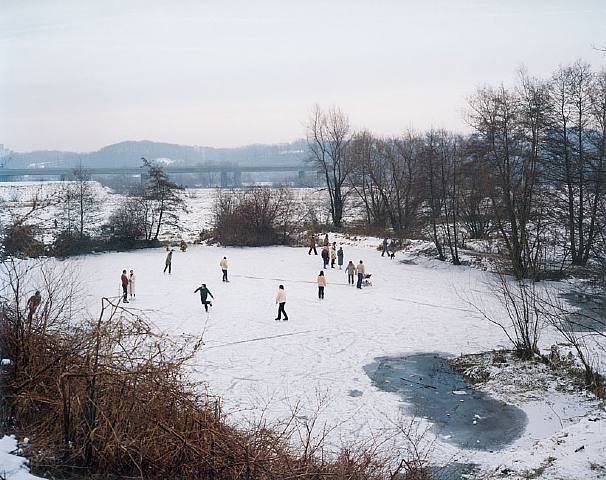 The coverings–walls, fences, or ceilings–that Brohm photographs stress the two-dimensional character of the photographic image. Sometimes triangles on the edges allow surprising glimpses into the depth of an image, and they prevent one from considering Brohm’s photography as conventional abstract work. Doors and windows also break through the surface. In one of his best works, the structure of a simple rental house’s facade is revealed through its broken stucco. Also, the image is slightly crooked so that the windows are cropped. The special but unspectacular choice of this strange view makes this photograph a rhythmical, appealing representation of muted color.

Brohm also moves the central image around the photograph through the use of strange camera angles. In several works it seems as if the camera had fallen forward off the tripod. Instead of architecture one sees street or grass. And these flat forms are imprinted by structures or signs of the past. For example, tire tracks have created a crucifix in the middle of a golf course. Or storms and damage have left behind traces on walls, signs that appear self-referential in these photographs. The photographed traces become traces on the photographic paper.

Characteristic of Brohm’s work is a dark, cloudy sky that appears white in the photographs. Another photographer would light the image so that the sky would have a gray tone in order to differentiate between image and paper, but Brohm prefers to allow the two to merge. Thus, background and subject are combined and create marked forms beyond the rectangle.

Behind these formal concerns, there lies a political and social content. In a new work–an image of a mosaic with classical decoration–small swastikas actually form the pattern. This is not immediately apparent, but upon closer examination they are evident. This mosaic is still in the entry foyer of the Haus der Kunst in Munich which, in 1937, was dedicated to the city by Adolf Hitler as a National Socialist temple of art.